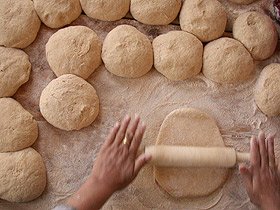 Bakery or bakery is a trade (generally also an industry, except in cases where the owners sell only outsourced products) of great popularity in several countries. Most of them are small companies, but several entrepreneurs are investing in order to be known as Great Houses.

Generally, large bakeries function as a meeting point for various entrepreneurs, salespeople, etc. These companies have been evolving lately and offering services such as Wi-Fi access, happy hour, among others.

Story
The art of bakery was developed in the early Roman Empire. It was a highly famous art as Roman citizens loved roasts and demanded them frequently for important occasions like parties and weddings etc. Due to the fame and desire that the art of baking received, around 300 BC, bakery was introduced as a respectable occupation and profession for the Romans. Bakers began to prepare bread at home in an oven, using mills to grind grains into flour for their bread. The oncoming demand for baked goods vigorously continued and the first bakers’ guild was established in 168 BC in Rome. This drastic appeal for bakery products has promoted baking across Europe and has expanded to eastern parts of Asia. Bakers started to make breads and products at home and sell them on the streets.

This trend became common and, soon, bakery products were sold on the streets of Rome, Germany, London and many more. This resulted in a system for delivering goods to families, as the demand for baked bread and goods increased significantly. This caused the bakers to establish a place where people could buy baked goods for themselves. Therefore, in Paris, the first open-air bakery for bakery products was developed and, since then, bakeries have become a common place to buy delicious products and gather around the world. In the colonial era, bakeries were commonly seen as places to meet and socialize.

On July 7, 1928, a bakery in Chillicothe (Missouri), introduced pre-cut bread using the automatic bread slicer, invented by Otto Frederick Rohwedder. While the bread initially failed to sell, due to its “sloppy” aesthetic, and the fact that it became obsolete faster, it later became popular. In World War II, bread slicers were effectively banned, as the metal in them was needed for wartime use. When asked to create 100 tonnes of metal alloy, the decision proved to be very unpopular with housewives.

World War II directly affected the bread industries in the United Kingdom. Bakery schools closed during this period, so that when the war ended, there was an absence of skilled bakers. This resulted in new methods being developed to satisfy the world’s desire for bread. Methods such as: adding chemicals to the mix, pre-mixes and specialized machinery. These old cooking methods were almost completely eradicated when these new methods were introduced and industrialized. The old methods were seen as unnecessary and financially insecure, during that period there were not many traditional bakeries.

Did a Drunk Baker Make the First Crackling Bread?